The European Forum on Electronic Signature (EFPE) 2013, the biggest international conference in Europe on the issues of e-signature and e-identification, has come to an end. The Conference was attended by over 130 participants from 21 countries. 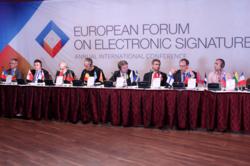 This year’s EFPE was held under the honorary patronage of: the Minister of Economy, the Minister of Justice, the Minister of Administration and Digitalization, the Parliament of the Republic of Poland, the European Committee for Standardization, and the Polish Chamber of Information Technology and Telecommunications. The organisers of EFPE 2013 included Unizeto Technologies and the West Pomeranian University of Technology in Szczecin, a content-related partner was the European Telecommunications Standards Institute (ETSI). Media coverage of the Conference was provided by the Dziennik Gazeta Prawna daily, Computerworld and Manager magazines, TVP Szczecin, Instytut Cyfrowa Polska, and internet portals WebSecurity.pl, E-fakty.pl and Logistyka.net.pl.

The topic of the 13th conference, which took place in Międzyzdroje on 5–7 June, was “Trust electronic services in the international digital market”. The Conference became an arena for many lively discussions on technological trends in the field of e-identification and the issues of legal regulations.

“Today the digital market needs to select uniform and effective solutions for e-verification, which would enable running a modern on-line business and establishing trusted on-line contacts on an international scale. During EFPE 2013, various points of view on the subject were presented, but we all agreed that e-identification should be simple and widely available,” said Andrzej Bendig-Wielowiejski, President of the Board at Unizeto Technologies – a co-organizer of EFPE 2013.

Technologies
The current trends in technological development directly affect the e-signature market. During EFPE 2013, examples of using mobile devices and cloud computing were discussed at length. Both solutions facilitate dynamic and comfortable use, and verification of the e-signature. In this respect, the development of smartphone and tablet applications, as well as cloud-based applications, will facilitate safe e-identification. However, as far as propagation of the e-signature goes, providing the tools is not enough – proper legislation is required that would standardize solutions and ensure their widespread availability.

Law
EFPE 2013 was preceded by a three-day meeting of TC ETSI experts (Technical Committee on Electronic Signatures and Infrastructures of the European Telecommunication Standards Institute).

As part of the discussion held by the Committee of the Institute (which has 700 member organizations from 62 countries) matters related to the draft regulation on the functioning of e-signature for all EU Member States (eIDAS) were tackled. ETSI is an official EU advisory body, and the standards it establishes are always taken into account in legislative work.

The subject of eIDAS was discussed many times during EFPE 2013. The initiative was thoroughly discussed in the context of the experiences of non-EU states, e.g. Russia, Ukraine, Kazakhstan, Israel and Japan. By comparing solutions that have been applied it was possible to formulate some common conclusions and guidelines. The members of the Programme Committee and representatives of business and administrative entities, as well as standardization committees, used them as the basis for a memorandum read at the end of the Conference. The document edited at the Conference will be sent to the institutions and entities that deal with the issue of digital services, in particular those involved in law-making in the scope of trust e-services in the European Union. Upon closing EFPE 2013 the organizers invited the participants to the 14th conference next year.